Each year, St Antony’s Boat Club attracts a membership of about 70 students, or about one-quarter of all College students present in Oxford during term time. They join for many reasons – to get fit, to stay fit, compete, and have fun, make friends and to make unique Oxford memories – and each year, the Boat Club helps them achieve all those goals. 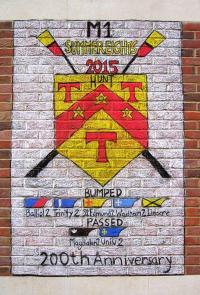 The Boat Club organizes every year 300 water outings, catering to various skill levels across both the Men’s and Women’s crews. In last year’s Summer VIIIs competition, the Boat Club achieved unprecedented success with a treble blade winning campaign and both the men’s and women’s first teams ranked at their highest position in Summer VIIIs history as the club looks to move up the bump charts.

At the same time, the Boat Club acted as a catalyst for Antonians even outside the club to gather and engage with one another, creating an essential part of the St Antony’s College experience for all who attended. With so many Antonians directly involved in rowing, many others in the College participate indirectly by cheering on their friends and peers.

Sporting successes such as these, and the mix of fun and commitment that make them possible, is why students who row at St Antony’s never forget their time in the Boat Club. To rowers, the Boat Club is an important part of their Oxford journey and an important link back to Oxford and to St Antony’s as alumni.

The Boat Club organizes a Formal Dinner for current and past members each academic term, and the Old Antonian Rowers is an ever-growing community of alumni rowers who are separated by years and decades but regularly find one another in cities around the world to network and to share memories of former glories.

The last two years have been a moment of strength for the Boat Club, with strong executive teams and a swelling membership base and strong race results. A small Board of Advisors (Boat Club executives, alumni and the College Bursar and Development Director) helps the Club manage its resources and responsibilities consistently year after year. The Boat Club wants to seize this moment and to fundraise to stabilize and grow the Club’s capacity to serve St Antony’s students. At present, the Boat Club runs on less than half the budget of boat clubs at comparable Oxford graduate colleges and charges fees to its own members that are nearly twice as high.

The Club’s current boats are reaching their estimated retirement dates: the two racing boats’ – Men’s and Women’s VIII – replacement date is 2017 and the training boat has passed its date by about five years. The Boat Club’s ambition is therefore to raise £24,000 to buy two boats for both gender sides of the Club. The first boat will be purchased as soon as sufficient money is available and the second boat once the remaining funds are raised.

With the funds raised, the Boat Club will purchase two second hand boats that will be a huge improvement on the current ones that are nearing replacement date. Durability is the primary criterion as the club is financially constrained and the long boat lifetime will ensure that any money is efficiently and wisely spent.

Further details on the need, ambition and boats, can be found on the Boat Purchase Strategy Document (PDf) which was created in coordination with the Board of Advisors.

The Boat Club is a vital part of student life at St Antony’s College; it needs your support to sustain that role. With your support, we have a vision to grow, to do more for students and to help build lifelong links between them and St Antony’s.

To encourage giving, naming opportunities are in place and these can be taken up individually or in crews. The Boat Club invites former crews to come together and jointly donate £1,500 so that a seat in one of the new racing boats can be named after them.

St Antony's College is a registered charity (number 1141293). There are several schemes available to help donors based in various countries to make tax efficient donations.

Donors from the UK, United States, Canada, Germany and Hong Kong can give directly to the Collegiate University tax-efficiently.

Through Transnational Giving Europe (TGE), a collaborative giving scheme offered by a partnership of European foundations, Antonians in Belgium, the Netherlands and Poland, can also make tax-efficient donations to the College.

Thank you for your generosity.