European policy on the Middle East: Making a difference?

European policy on the Middle East: Making a difference?

Since the Lisbon Treaty came into force in 2011 and the European Union pledged to reinforce its foreign policy cooperation, it has struggled to articulate and implement a policy on the Middle East which effectively protects and furthers its interests in the region.  It responded swiftly but not very successfully to the Arab Spring; it played a supporting role in the fight against Islamic terrorism, and championed the Iran nuclear deal; but otherwise became a bystander in the growing conflicts in the region; it tried hard to maintain stability and add some momentum in the Israel-Palestine peace process; but it became increasingly obsessed after 2015 with the challenge of migration from and through the region. The paper assesses why it has struggled to formulate a policy, what it has managed to achieve nonetheless, how national and European policies have interacted, why it is increasingly important for the EU to have a coherent policy on the region, and makes proposals for what that policy should be and how it could be made effective. 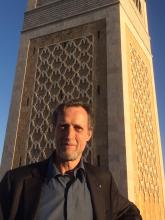 Dr Nicholas Westcott has been Director of the Royal African Society since November 2017, having worked for the Foreign and Commonwealth Office and European Union for 35 years, and been involved with Africa for over 40 years. After completing a BA in History and PhD in African history at Cambridge University, he joined the FCO in 1982 and has served in Brussels, Washington DC, Tanzania (as Deputy High Commissioner) and from 2008-2011 as British High Commissioner to Ghana and Ambassador to Cote d'Ivoire, Burkina Faso, Niger and Togo. Prior to that, from 2002-2007, he was the FCO’s Chief Information Officer.  In 2011 he moved to Brussels to work for the EU's External Action Service as Managing Director for Africa, and from 2015 as Managing Director for the Middle East and North Africa. He is on the Editorial Board of African Affairs, on the Board of the African Centre for Economic Transformation (Accra), is a Fellow of the Royal Geographical Society and a member of Chatham House. He was awarded the CMG in 1998. He has published a number of articles on African history, European foreign policy and international economic relations, and maintains an active interest in contemporary African  and Middle Eastern politics, business, music and culture. He tweets @NickWestcottRAS