Fear and Insecurity: Competing Narratives of the Iran-Israel Relationship

Fear and Insecurity: Competing Narratives of the Iran-Israel Relationship

Years after the Islamic Republic of Iran resumed its nuclear development program, Israeli leaders began constructing a narrative aimed at instilling in their polity the fear of Iran as an existential threat to the Jewish State. Building upon Israel’s geopolitical insecurity, politicians, assisted by societal elites, repeatedly claimed that the imminent acquisition of a bomb by Iran’s religious fundamentalist regime undermined Israel’s security and threatened the stability of the world order. This project examines how Israeli leaders crafted a narrative in which Iran’s rulers sought the destruction of Israel; how the Israeli public internalized this perception of Iran as an enemy; and how Prime Minister Benjamin Netanyahu incorporated this message into his foreign policy agenda and used it in efforts to secure the support of international allies. Through the lens of securitization theory, this project analyzes primary source documents to show the divergence between the narrative’s content and historical facts. In doing so, it highlights how perception eclipses reality when a powerful securitizing actor claiming exclusive access to material information identifies a threat source and publicly promotes its danger. It then examines how Prime Minister Benjamin Netanyahu strategically embraced populist strategies to advocate for extraordinary action against Iran and to bolster his status as a leader and national protector. Taking advantage of Israel’s failure in the Second Lebanon War and Iran’s election of a radical and bombastic president, Netanyahu chose resonant tropes – misusing history, recasting Holocaust memory, and fashioning an overarching moral imperative – to create a permanent crisis and secure Israelis’ acquiescence. By 2015, however, he had failed to convince international powers that a negotiated deal suspending Iran’s nuclear enrichment program would make Israel and the world less safe. This project contributes to our understanding of current and future developments in the Israel-Iran enmity, both predictable and unanticipated.

Jonathan Leslie received his PhD from the School of Oriental and African Studies, University of London, in Politics and International Studies. His thesis examines the relationship between Israel and Iran, focusing on Israeli perceptions of Iran as a security threat. He received his master’s degree in International Relations and International Economics from the Johns Hopkins School of Advanced International Studies in Washington, DC, and his bachelor’s degree from Princeton University in 2008, majoring in Politics. Jonathan has lived, worked, and researched in countries across the Middle East, including Israel, Jordan, and Syria. He currently resides in Washington, DC, with his wife, Anne. 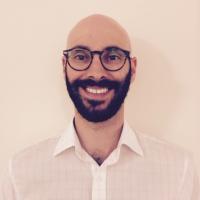