Dr Carol Amouyel-Kent (DPhil History, 1971) is now President of the Oxford University Society of Paris, which is the main Alumni group in France and officially recognised by the Alumni Office. We have 250+ members and organise regular events for Alumni throughout the year, often together with CamSoc Paris.

Professor Alan Gamlen (DPhil Geography and the Environment, 2010) welcomed Professor Alex Betts (DPhil International Relations, 2007) to the Hugo Centre at the University of Adelaide, as the 2017 Hugo Lecturer.

Aharon Nathan keeps a website – www.aharonnathan.com for members who might be interested in reading my comments on the aftermath of the EU Referendum and various postings on Israel.

Dr Ivan Pearson (DPhil International Relations, 2009) got the surprise of his life when a group of his friends (including fellow Antonians: Gosia Pearson, Joanna Gorska, Florian Nickels-Teske, Milos Damnjanovic, Richard Horton, Pierre Gemson, Erin Court and Timo Idema) showed up at his door in Brussels to celebrate his birthday and enjoy a long overdue Late Bar reunion. 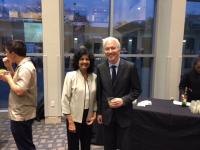 Agnes Thambynayagam (Associate Student, 2004-2007) met Professor Eugene Rogan when he gave a lecture at the University of Houston.

Professor Hilary Winchester (DPhil Social Studies, 1976) been made President of the University of Oxford Alumni Network for South Australia. In December 2017, the Society hosted the Chancellor and Lady Patten at a breakfast during their visit to Adelaide, which was also attended by the Chancellor of the University of Adelaide. They were given a brief tour of the surrounding areas by Michael Magarey, a former Rhodes Scholar, and then attended part of the Ashes test match at the Adelaide Oval on an unseasonably cool December day.