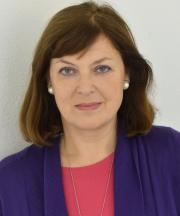 Bridget Kendall has been BBC Diplomatic Correspondent since 1998. Based in London she covers major international developments and global trends for BBC radio, television and online.

She has a particular interest and expertise in Russia and East/West relations and covered the collapse of the Soviet Union, as well as conflicts in Kosovo, Chechnya, Iraq, Afghanistan, Libya and now Syria.

She is also host of The Forum, the flagship discussion programme for BBC World Service radio, which explores new ideas and research from around the world.

Awards include the James Cameron Award for distinguished journalism and an MBE in the 1994 New Year's Honours list.

She was educated Harvard and Moscow universities as well as two Oxford Colleges, Lady Margaret Hall and St Antony’s College, both of which have made her an Honorary Fellow.

She is on the Advisory Board of Wilton Park and a visiting professor of Journalism at Lincoln University.