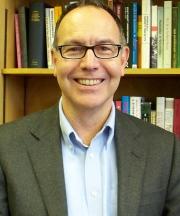 Professor Dan Healey joined St Antony's College as Professor of Modern Russian History in October 2013. Before that he taught at the University of Reading (2011-2013) and at Swansea University (2000-2011).

He is the author of several books and articles on modern Russian history. His study of the history of homosexuality in tsarist and Soviet Russia, Homosexual Desire in Revolutionary Russia: The Regulation of Sexual and Gender Dissent, was published in 2001 by University of Chicago Press, and was designated proxime accessit for the Royal Historical Society’s 2001 Gladstone History Book Prize. It was published in Russian by Ladomir Press, Moscow, in 2008. A study of the early Soviet “sexual revolution” followed in 2009, entitled Bolshevik Sexual Forensics: Diagnosing Sexual Disorder in Clinic and Courtroom, 1917-1939.

He is currently researching a book on the history of medicine in Stalin’s Gulag camps.  He has also edited two essay collections: Soviet Medicine: Culture, Practice, Science (2010) with F. Bernstein and C. Burton; and Russian Masculinities in History and Culture (2002) with B. Clements and R. Friedman. He has published many articles and book chapters on the history of Russian homosexuality, on Russia’s contemporary politics of so-called “non-traditional” sexualities, on the history of Russian psychiatry and forensic medicine, on gender, and on the Gulag.

He was joint Reviews Editor of Gender & History, 2004-2008, and he co-edits the H-Histsex History of Sexuality H-NET Discussion List. He also serves on the Editorial Board for Slavonic & East European Review.