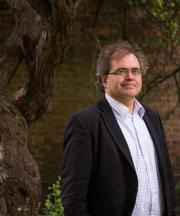 Hartmut Mayer joined the European Studies Centre as Director on 1 September 2017. He has been and will remain a Fellow and Tutor in Politics at St. Peter's College, University of Oxford, where he has been teaching politics and international relations since 1998. Hartmut is seconded to St. Antony's during the time of the ESC Directorship.

Hartmut has been involved with the ESC ever since his graduate student days at St. Antony's going back to 1994. Later he served in an advisory capacity and has seen the growth and changes of the Centre for more two decades.

Concurrently with the ESC Directorship, Hartmut will also serve as the Acting Director of the EUROPAEUM, a consortium of leading European Universities. In addition, he holds an Adjunct Professorship in European and Eurasian Studies at Johns Hopkins University, SAIS Bologa since 2014.  Since 2016 he has also taught International Relations in the Hong Kong Fellows' Programme at the Blavatnik School of Government. He is also a Region Head Europe at Oxford Analytica, a global consultancy, in a free lance capacity.

Hartmut studied history, politics, drama and international relations in Germany, the United States, the UK and Italy and holds degrees from the Free University of Berlin (BA equivalent), the Fletcher School of Law and Diplomacy at Tufts University (MALD), Cambridge University (MPhil from Gonville and Caius College) and Oxford University (DPhil from St Antony's College and an MA by Resolution).

Hartmut has held various research positions over the years which include the European University Institute in Florence (1995), the Finnish Institute for International Affairs in Helsinki (2003), the Stiftung Wissenschaft and Politik in Berlin (2004) and Waseda University (2006-07) in Tokyo. In 2010, he was a Visiting Professor at Hitotsubashi University, again in Tokyo. Between 2011 and 2014 he held a three year Guest Professorship at Hamburg University and the GIGA German Institute for Global and Area Studies.  In 2014 Hartmut was a Wiener-Anspach Visiting Professor at Universite Libre de Bruxelles (ULB) and an OXPO Visiting Profesor at Sciences Po in Paris for a month each. In 2016, he spent a sabbatical term at SAIS Johns Hopkins in Washington, DC.

His main academic interests are general international relations, diplomatic history, German and EU politics, international relations theory, EU-Asia (in particular Japan), European responses to Rising Powers and Comparative Regionalism. His main publications include three books: one on EU External Relations, Hartmut Mayer and Henri Vogt, "A Responsible Europe? Ethical Foundations of EU External Affairs" (2006); one on German-British Relations, Hartmut Mayer and Thomas Bernd Stehling, "German-British Relations and 'the Spirit of Cadenabbia'”, (2005) and most recently a book on EU and Japan, Hartmut Mayer with Paul Bacon and Hidetoshi Nakamura, "The European Union and Japan: A New Chapter in Civilian Power Cooperation?" (2015).  In addition, he has written many book chapters and journal articles published in, to name a few, "International Affairs", "Journal of European Integration", "Journal of European Integration History", "Perspectives: Review of International Affairs", and the "South African Journal of International Affairs".

Prior to his academic career, Hartmut worked for more than ten years as a freelance journalist in Germany.

Hartmut is also keen footballer and has played for St. Antony's College in the Oxford MCR Football League for more than 20 years.