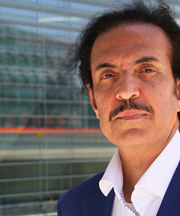 Dr. Nayef Al-Rodhan is a Philosopher, Neuroscientist and Geostrategist.

He is an Honorary Fellow of St Antony's College and Senior Fellow and Centre Director of the Centre for the Geopolitics of Globalization and Transnational Security at the Geneva Centre for Security Policy, Geneva, Switzerland.

His Philosophical interests include: Global Justice; Human Dignity and International order; Transcultural Synergy; Philosophy of Human Nature; Philosophy of Sustainable History; History of Ideas; Cellular and Neurochemical Foundations and Predilections of Human Nature and Their Implications for War, Peace and Moral and Political Cooperation.

He has proposed many innovative theories and concepts in Philosophy, Global security, and Geostrategy and published 21 books. He is best known for several Philosophical and analytic works on global politics that include: "Sustainable History and the Dignity of Man"; "Emotional Amoral Egoism"; "Neo-Statecraft and Meta-Geopolitics", "Symbiotic Realism "; "Critical Turning Points in the Middle East: 1915-2015"; "The Politics of Emerging Strategic Technologies"; "The Meta-Geopolitics of Outer Space"; and "The Role of the Arab-Islamic World in the Rise of the West"