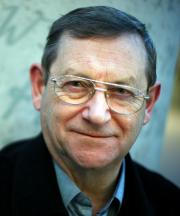 Professor Norman Davies CMG, FBA, FLSW, FRSL, FRHistS etc has been an Honorary Fellow of St Antony's since 2011. Born in Bolton, (Lancashire), he was educated at Bolton School, the University of Grenoble, Magdalen College, Oxford (MA), the University of Sussex (MA) and the Jagiellonian University, Krakow (PhD). Professor Emeritus of UCL-SSEES, he was elected to the British Academy in 1997, and awarded the CMG in 2001 "for services to History".  An Honorary Fellow of Clare Hall, Cambridge, and a life member of Peterhouse, he has received many honorary doctorates and literary prizes, is an honorary citizen of four cities, and in 2012 was granted Poland's highest award, membership of the Order of the White Eagle.

Professor Davies's association with St Antony's College goes back to 1969, when he was tutored by the late Harry Willetts. In 1970-2, he was the first Alistair Horne Research Fellow in residence, and remained a Senior Associate Member for over three decades. He returned as a Visiting Fellow in 2008-9, since when he has been a member of the Russian and Eurasian Center. In 2012, through his connection with the philanthropist, Dr Leszek Czarnecki, he initiated the College's Programme on Modern Poland which, chaired by the Warden Margaret Macmillan, ran 2013-16.

Norman Davies is a well known writer, broadcaster commentator, and traveller. He has been a Visiting Professor at Columbia, McGill, Hokkaido, Stanford, Harvard, Adelaide, ANU (Canberra), and Tasmania. In 2012, he embarked on a world tour, which took him to a score of countries and formed the basis of his book, Beneath Another Sky, (Penguin, 2017), translated as Ins Unbekannte: eine Weltreise in die Geschichte, (WBG Theiss, Darmstadt, 2020).

Most recently, Norman has received honorary degrees from UCL (2015) and the University of Bolton (2018).  Inadvisedly nominated for the Nobel Prize for Literature, he has published an autobiography, Sam o Sobie, (Znak Krakow,  2019).  In 2020, the Folio Society produced a 3-volume, special edition of Europe: a history.  At present, when not appearing on assorted webinars, he is writing a History of Galicia.