The History of the Visiting Parliamentary Fellowship

The History of the Visiting Parliamentary Fellowship

Although St Antony's has always included many Fellows and students with an interest in contemporary politics and world affairs, a notable addition to the College's activities was launched in May 1993 when the Governing Body created a Visiting Parliamentary Fellowship. The idea was that two Members of Parliament - one from the governing party and the other from one of the main opposition parties - would be elected to the Fellowship each year. The hope, which has been fully realised, was that they would visit the College regularly and in one term help to organise a seminar on important political and other matters.

The origins of the Fellowship were a chance encounter between Patrick (now Lord Patrick) Cormack, MP, and Professor Archie Brown in Moscow in January 1991 who agreed on the potential intellectual benefits for both sides if an academic relationship between Parliament and the College could be established. Once the question of the modest amount of funding needed to launch the enterprise had been resolved, the idea took off, and two parliamentarians from opposing political parties have been elected annually since 1994.

Over the years, the Visiting Parliamentary Fellows have included such notable former Cabinet Ministers as the Rt Hon. Gillian Shephard, MP, the Rt Hon. Sir Brian Mawhinney, MP, and the Rt Hon. Ann Taylor, MP. Three influential Chairmen of House of Commons Committees - Donald Anderson, MP (Foreign Affairs Committee), Dr Tony Wright, MP (Public Administration Committee) and Martin O'Neill, MP (Trade and Industry Committee) have been among the Fellows. In addition to these very senior parliamentarians, those elected have included also several of the brightest of the younger Members, among them Dr Calum MacDonald, MP (Labour), Alan Duncan, MP (Conservative) and Charles Kennedy, MP (Liberal Democrat).  In recent years, as the pressure on MPs from the whips' offices grew, the programme increasingly turned to the House of Lords for its Parliamentary Fellows.  Among them have been some of the country's most distinguished political figures:  David Trimble, David Steel, Alex Carlile and Des Browne.

A tradition rapidly developed that in Hilary Term - mostly on Tuesdays at 5 p.m. - the two Visiting Parliamentary Fellows would, along with the St Antony's Governing Body Fellow who co-ordinates the Fellowship, put on a seminar that brought together politicians and academics. The format involves three speakers, whose presentations would take a maximum of twenty minutes each, and then the floor is opened for questions and general discussion.

The unifying theme of the seminar each term is invariably a broad one with a current global importance, and it cuts across all Centre boundaries. It is by far from unusual for the 150-seat lecture theatre to be full, or almost full, for these events. Speakers in Hilary Term 2004 included no fewer than three former British Foreign Secretaries. The annual series is aimed at tackling the mix of contentious domestic and international issues that have attracted attention in both parliament and the universities.

Many of the MPs have convened informal seminars in the other two terms for any St Antony's students wishing to take part, and several of them have arranged for groups of students from the College to visit the House of Commons. The Parliamentarians' presence in the College (from late Tuesday afternoon until after High Table that evening) has helped to keep resident Antonians in touch with the politics of the 'real world' and it has given the MPs access to arguments that, at their best, are more analytical and also based on more specialised knowledge, than they would generally encounter in the Commons. Other advantages to both sides include the fact that some of the MPs have consulted specialists in one or other of the College Centres when they wished to better briefed on a particular country, while our Parliamentary Fellows have, for example, helped out when graduate students in this most international of Oxford Colleges have encountered excessive delays in the renewal of visas. Former Visiting Parliamentary Fellows have also hosted social events in the House of Commons for London-based Antonians.

From the launch of the Fellowship in 1993 until 2005 the Governing Body's convenor was Archie Brown. From the 2005 till 2008, he was succeeded by Dr Alex Pravda. From the academic year 2008-9, the co-convenor was Professor Robert Service, who was succeeded by Professor Timothy Power in 2015. In 2021 Professor Roger Goodman became the current convenor. Professor David Marquand and Dr Phyllis Starkey, both of whom are former MPs, have also served as co-convenors.

2013-2014:  The Rt Hon the Lord Browne of Ladyton and Baroness Bonham-Carter of Yarnbury

2014-2015:  Lord Inglewood of Hutton in the Forest and Baroness Andrews of Southover 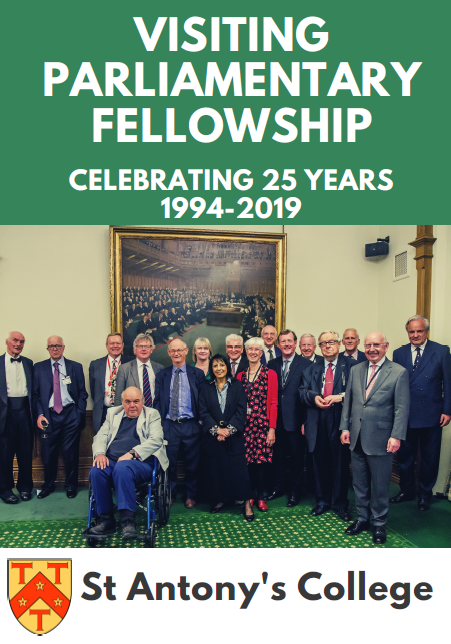 On 24 April 2019, twenty-five years of the Visiting Parliamentary Fellowship at St Antony's was celebrated in the Churchill Room of the Palace of Westminster. A booklet detailing the history of the VPF was published to help reinforce a sense of community among the parliamentarians who have been elected by the College while reminding them that, while holding the Visiting Parliamentary Fellowship may only be for a year, membership of St Antony’s is for life.  The other objective of this booklet was to record the history of the first 25 years of the Fellowship and, for that, the College would like to express its particular thanks to its progenitors, Archie Brown and Patrick Cormack.