The Greek Military Dictatorship: Revisiting a Troubled Past, 1967-1974

The Greek Military Dictatorship: Revisiting a Troubled Past, 1967-1974 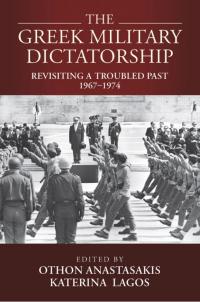 The SEESOX event takes place, on the anniversary of the 17th of November 1973 Polytechnic uprising, a big blow to the junta’s dictatorial authority contributing to its discrediting and downfall in July 1974. The panel will reflect on the military regime’s reactionary, ultra-conservative, repressive and pseudo-modernising attitudes and policies towards education, youth and culture, as well as on the long lasting legacies of this disturbing past. Some of these views draw from the recently published volume The Greek Military Dictatorship: Revisiting a troubled Past, 1967-1974 (Berghahn 2021) edited by Anastasakis and Lagos, which contains a novel and well-researched study of the regime’s domestic and foreign affairs, a haunting period in Greece’ s recent history.

Othon Anastasakis is the Director of South East European Studies at Oxford (SEESOX); Senior Research Fellow at St Antony’s College; Associate at the Department of Politics and International Relations; Affiliate of the Centre for International Studies; Affiliate of the Oxford School of Global and Area Studies (OSGA); former Director of the European Studies Centre, St Antony's College, Oxford (July 2012-October 2015). He teaches “South East European politics and European integration” for the OSGA and “EU politics” for the Department of Continuing Education, Oxford. He is currently the Principal Investigator of two research projects: “Greek Diaspora Project at SEESOX”; and the OX/BER funded “Migration Diplomacy and Turkey-EU relations”. He is also an Adjunct Professor at Simon Fraser University in Vancouver, Canada; Region Head of Europe in Oxford Analytica. He received his BA in Economics from the University of Athens, his MA in Comparative Politics and International Relations from Columbia University, New York and his PhD in Comparative Government from the London School of Economics. He holds additional degrees in French literature and politics from Paris IV and in Spanish literature, history and history of art from the Universidad Internacional Menendez Pelayo.

Foteini Dimirouli is Outreach and Early Career Development Fellow in English at Keble College, Oxford. She works on English and Modern Greek literature, often in comparison. Her forthcoming monograph (Authorising the Other, OUP) is concerned with the constitution of authorial fame and recognition. Her recent work focuses on culture and authoritarianism, with special attention paid to the appropriation of literature for both propagandistic and dissenting purposes.

Kostis Kornetis teaches contemporary history at the Autonomous University of Madrid (UAM). He has taught at Brown, New York University, and the University of Sheffield, and was CONEX-Marie Curie Experienced Fellow at Carlos III, Madrid, and Santander Fellow in Iberian Studies at St Antony’s College, Oxford. He is the author of Children of the Dictatorship. Student Resistance, Cultural Politics and the ‘long 1960s’ in Greece (Berghahn Books, 2013) and co-editor of Consumption and Gender in Southern Europe since the “Long 1960s” (Bloomsbury, 2016) and Rethinking Democratisation in Spain, Greece and Portugal (Palgrave Macmillan, 2019). He is currently writing a book on the generational memory of the transitions to democracy in Southern Europe (OUP, forthcoming 2022).

Katerina Lagos is a Professor of History at California State University, Sacramento and the Director of the CSUS Hellenic Studies Program and Hellenic Studies Center. She is Adjunct Professor at Simon Fraser University in Vancouver, Canada, the social sciences book review editor for the Journal of Modern Greek Studies, and also a member of various academic and professional organizations. She received her DPhil from St. Antony's College, Oxford in modern history. Her research focuses on the Metaxas dictatorship, minorities, and the interwar period. She has published a number of articles and book chapters on these topics and is currently working on a book manuscript on the Metaxas dictatorship and Greek Jewry, 1936-41 (forthcoming, Palgrave).

If you wish to attend this event in person, please register with Eventbrite

To attend this event virtually, please register with Zoom

Attendees are asked to:

The latest University guidance on the use of face coverings