Preventing Palestine: A Political History from Camp David to Oslo

Preventing Palestine: A Political History from Camp David to Oslo

Based on newly declassified international sources, Preventing Palestine charts the emergence of the Middle East peace process, including the establishment of a separate track to deal with the issue of Palestine. At the very start of this process, Anziska argues, Egyptian-Israeli peace came at the expense of the sovereignty of the Palestinians, whose aspirations for a homeland alongside Israel faced crippling challenges. With the introduction of the idea of restrictive autonomy, Israeli settlement expansion, and Israel’s 1982 invasion of Lebanon, the chances for Palestinian statehood narrowed even further. The first Intifada in 1987 and the end of the Cold War brought new opportunities for a Palestinian state, but many players, refusing to see Palestinians as a nation or a people, continued to steer international diplomacy away from their cause (Princeton University Press).

Dr. Seth Anziska is the Mohamed S. Farsi-Polonsky Lecturer in Jewish-Muslim Relations at University College London. His research and teaching focuses on Palestinian and Israeli society and culture, the international history of the modern Middle East, and contemporary Arab and Jewish politics. He is the author of Preventing Palestine: A Political History from Camp David to Oslo (Princeton University Press, September 2018). His writing has appeared in The New York Times, The New York Review of Books, Foreign Policy, Haaretz, and the Pavilion of Lebanon in the 2013 Venice Biennale. A visiting fellow at the U.S./Middle East Project and a 2018-2019 Fulbright Scholar at the Norwegian Nobel Institute, Seth has held fellowships at New York University, the London School of Economics, and the American University of Beirut. He received his PhD in International and Global History from Columbia University, his M. Phil. in Modern Middle Eastern Studies from St. Antony’s College, Oxford, and his BA in history from Columbia University.

Signed copies of the book will be available on sale at the event. Cash only. 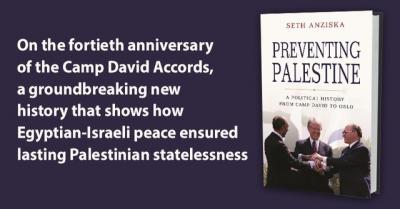