Trafficking and slavery under ISIS: Trauma and rehabilitation of Yezidi female survivors

Trafficking and slavery under ISIS: Trauma and rehabilitation of Yezidi female survivors

Sinjar became the center of the world’s attention when one of the most horrifying cases of genocide took place, and also due to women who suffered from acts of violence, psychological trauma, and torture. A year after the Ezidi genocide in Iraq, many women fled from ISIS. Each of the women who managed to escape has a different history of persecution. This research was conducted to examine the problems which these women faced on a daily basis—problems occurring after experiencing sexual violence, persecution, and forced migration to Europe. The costs of forced migration, which is the consequence of the armed conflict, are enormous. Women in the diaspora remain attached to, and empowered by, a “home” culture, fundamental values of propriety, and religion. Women who were victims of violence or abuse developed trauma, which consequentially led to the psychological disorder of post-traumatic stress. They are terrified because of their experiences during the war. How can these women integrate into a new society? How can integration help them to recover from their traumatic stress? Experiences of displacement reshape constructions of “home” or the nation. This research constitutes a critical assessments of gender-based violence, as a source of displacement. 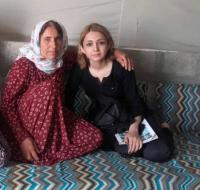 Behnaz Hosseini completed her doctoral research with a focus on Yārsān, a religious minority in Iran and Tran-nationalism in Sweden at the Institute of Oriental Studies in University of Vienna. Her research interests include religious minorities in Iran and Iraq, forced migration and integration. During her research she has been involved in multiple projects including” Trafficking and slavery under ISIS: Trauma and rehabilitation of Yezidi  female survivors”, as well as “Analysis of Forced migration and displacement of Iraqi religious minorities in Austria, she worked as post-doctoral fellow in department of sociology in University of  Alberta where she was working on a research project about Iranian religious minorities and doing research field work on the Kurdish communities in Alberta.

Behnaz Hosseni—an expert on refugee and resettlement issues with extensive research background on ethno-religious conflict and migrant resettlement. Between 2014 -2017, she visited numerous refugee camps in Iraq and interviewed asylum-seekers in Germany and Austria. She has also written her book regarding Iraqi religious minorities and immigrants in Austria (Lit Verlag October 2018) focusing on the cultural dynamics of settlement and attempts made by the group to preserve their ethnic and religious identity. During 2017-2018 she was doing research on child marriage and suicide on Kurdish community in Iran and she continues to be involved in same research during her visiting in Oxford.