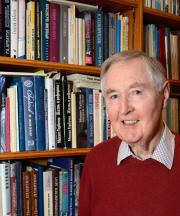 After teaching for thirty-four years at St Antony's College, Archie Brown became Emeritus Professor of Politics at Oxford University and an Emeritus Fellow of St Antony's in October 2005. He continues to pursue an active programme of research and writing. Professor Brown was University Lecturer in Soviet Institutions from 1971 until 1989, and from 1989 to 2005 Professor of Politics. He was Sub-Warden of St Antony's, 1995-97, and Director of the Russian and East European Centre (as it was then called), 1991-94 and 1998-2001. He was Director of Graduate Studies in Politics for the University from 2001 to 2003.

Archie Brown studied at the London School of Economics and Political Science as undergraduate and graduate student and taught at Glasgow University from 1964 to 1971. During the 1967-68 academic year he was a British Council exchange scholar at Moscow State University. He has been Visiting Professor of Political Science at Yale; the University of Connecticut; Columbia University; and the University of Texas at Austin as holder of the Frank C. Erwin, Jr. Centennial Chair of Government. In the Fall semester of 1998 he was Distinguished Visiting Fellow of the Helen Kellogg Institute for International Studies, University of Notre Dame.

Professor Brown was elected a Fellow of the British Academy in 1991, was Chair of the Academy's Political Studies Section, 1999-2002, and a member of the Council of the British Academy, 2014-2017. He was chosen as a founding academician of the Academy of Social Sciences in 1999 and he is an International Honorary Member of the American Academy of Arts and Sciences. In 2005 he was awarded a CMG in the Queen's Birthday Honours list 'for services to UK-Russian relations and to the study of political science and international affairs'. He received one of the three Diamond Jubilee Lifetime Achievement in Political Studies Awards announced by the Political Studies Association in November 2010 to mark the sixtieth anniversary of the association's foundation. Five years later he was given the 2015 Distinguished Contributions to Slavic, East European and Eurasian Studies Award at the ASEEES convention in Philadelphia.

Brown’s most recent book is The Human Factor: Gorbachev, Reagan and Thatcher and the End of the Cold War, published by Oxford University Press in Spring 2020. Prior to that he published The Myth of the Strong Leader: Political Leadership in the Modern Age (Bodley Head, London, 2014; Vintage paperback with updating new Foreword, 2018; Basic Books, New York, 2014) and The Rise and Fall of Communism (Bodley Head, London, and Ecco, New York, 2009; Vintage paperback, 2010; Ecco paperback, 2011). The Myth of the Strong Leader has been translated into Arabic, Chinese (Taiwan), German, Japanese, Korean, Russian and Spanish and is currently being translated into Czech. The Rise and Fall of Communism attracted nine translations. Professor Brown’s other books include (as co-editor – with Michael Kaser and Gerald S. Smith – and contributor) The Cambridge Encyclopedia of Russia and the Soviet Union (Cambridge University Press, 1994); The Gorbachev Factor (Oxford University Press, 1996; paperback, 1997; German translation, 2000; Japanese translation, 2008); The British Study of Politics in the Twentieth Century (co-editor – with Jack Hayward and Brian Barry – and contributor, Oxford University Press, 1999; paperback, 2008); Contemporary Russian Politics: A Reader (editor and contributor, Oxford University Press paperback, 2001); Gorbachev, Yeltsin and Putin: Political Leadership in Russia’s Transition (co-editor – with Lilia Shevtsova – and contributor, Carnegie Endowment for International Peace paperback, Washington, DC, 2001); The Demise of Marxism-Leninism in Russia (editor and contributor, Palgrave Macmillan St Antony’s series, paperback, 2004); and Seven Years that Changed the World: Perestroika in Perspective (Oxford University Press, 2007; paperback, 2008; Chinese translation, 2009). The Gorbachev Factor and The Rise and Fall of Communism were each awarded two prizes – the W.J.M. Mackenzie Prize of the Political Studies Association of the UK for best Politics book of the year and the Alec Nove Prize of BASEES for best book on Russia, Communism or post-Communism. The Myth of the Strong Leader was named by Bill Gates as one of the four best books he read in 2016.

Brown’s principal research interests are the comparative study of political leadership, the end of the Cold War, the Gorbachev era, the evolution and dissolution of Communism, political culture, democratization and national identity.