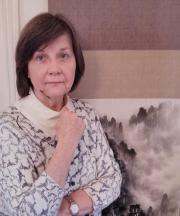 Vivienne Shue, FBA is Professor Emeritus of Contemporary China Studies, an Associate of the University of Oxford China Centre, and an Emeritus Fellow of the College.  As a Marshall Scholar studying at St. Antony’s in the late ‘60s, she earned the B. Litt. in Politics, later completed the Ph.D. in Government at Harvard and, before returning to Oxford as Director of its Contemporary China Studies Programme in 2002, taught Chinese politics to undergraduates and graduates at Yale and Cornell for more than twenty-five years. Best known, perhaps, for one of her early works, THE REACH OF THE STATE: SKETCHES OF THE CHINESE BODY POLITIC (1988), other books include PEASANT CHINA IN TRANSITION: THE DYNAMICS OF DEVELOPMENT TOWARD SOCIALISM (1980), STATE POWER AND SOCIAL FORCES (with J. Migdal and A. Kohli, 1994), TETHERED DEER: GOVERNMENT AND ECONOMY IN A CHINESE COUNTY (with M.J. Blecher, 1996), PAYING FOR PROGRESS IN CHINA: PUBLIC FINANCE, HUMAN WELFARE AND CHANGING PATTERNS OF INEQUALITY (with C. P. W. Wong, 2007), and TO GOVERN CHINA: EVOLVING PRACTICES OF POWER (with Merton Colleague Patricia Thornton, 2017).  Her more recent publications include: “Mao’s China: Putting Politics in Perspective” in J. Brown and M. Johnson eds., MAOISM AT THE GRASSROOTS (2015); “Party-state, Nation, Empire: Rethinking the Grammar of Chinese Governance”, Journal of Chinese Governance 2018, 3:3, 268-291. DOI: 10.1080/23812346.2018.1488495 ; and “Regimes of Resonance: Cosmos, Empire and Changing Technologies of CCP Rule”, Modern China 2022.  https://journals.sagepub.com/doi/10.1177/00977004211068055