History of the Centre

History of the Centre

The Middle East Centre of St Antony’s College is the centre for the interdisciplinary study of the modern Middle East in the University of Oxford.  Centre Fellows teach and conduct research in the humanities and social sciences with direct reference to the Arab world, Iran, Israel and Turkey, with particular emphasis on the nineteenth century to the present day.

The Centre was founded in 1957.  The directorship was assumed the following year by the modern historian Albert Hourani, who was to play a dominant role in establishing Middle Eastern studies in Oxford.  One of the first Fellows recruited to the Centre was Elizabeth Monroe who played an important role in establishing the Middle East Centre Archive in 1961.  They were joined in 1961 by Geoffrey Lewis as Lecturer in Islamic studies and Turkish.

The 1960s witnessed the introduction of a new postgraduate course in modern Middle Eastern studies (the B.Phil. in 1961, the precursor of the current M.Phil.) and the creation of a raft of new posts with British government funding. Roger Owen was appointed in Economic and Social History, Robert Mabro in Economics, Peter Lienhardt in Sociology, Mustafa Badawi in Modern Arabic, John Gurney in Persian History.  Derek Hopwood was appointed Bibliographer and subsequently Lecturer in Middle Eastern studies.  Under Albert Hourani’s guidance, Oxford emerged as one of the leading centres for the study of the Middle East in the English-speaking world.

The original fellowship of the Middle East Centre has proved remarkably enduring, though new members have joined over the years.  Mr Hourani was succeeded by Hamid Enayat following his retirement in 1979.  Avi Shlaim, Professor in International Relations, was attached to the Centre given his research interests in the Middle East. Celia Kerslake succeeded Professor Lewis as fellow in Turkish. Eugene Rogan was appointed to the lectureship in modern Middle Eastern history. Philip Robins was elected to a new post in the politics of the Middle East. Walter Armbrust was appointed to the Albert Hourani Fellowship and succeeded Derek Hopwood as University Lecturer in Modern Middle Eastern Studies.

Endowments have enabled the Centre to expand its fellowship in recent years. Michael Willis was appointed to the H.M. King Mohammad VI Chair in Moroccan and Mediterranean Studies through a most generous benefaction from the Moroccan British Society. Following a full professional search, Tariq Ramadan was appointed to the H.H. Sheikh Hamad bin Khalifa Chair in Contemporary Islamic Studies in 2009. In 2011, the Centre welcomed Laurent Mignon joining as Fellow in Turkish, following the retirement of Celia Kerslake; and Marwa Daoudy, joining for two years, as Fellow in the International Relations of the Middle East. In 2015 Toby Matthiesen joined the Centre as Senior Research Fellow in the International Relations of the Middle East - his work has focused on the international relations of the Arab Gulf states.

The growth of the fellowship was matched by a major expansion of student numbers between 2007 and 2017. With admissions for the M.Phil exceeding 20 candidates a year; a new M.Sc in modern Middle Eastern Studes from 2018; and new doctoral admissions in excess of 20 a year, the Centre is now catering to a graduate student population of more than 100 masters and doctoral students. This level of growth would have been unsustainable in the original Centre facilities.

Originally based in a Victorian house on the Banbury Road, the Centre has been housed in the former Rectory of the Church of SS. Philip and James (built in 1887) at 68 Woodstock Road since 1978. Between 2007 and 2015, the Centre embarked on its most ambitious development project ever, to provide the facilities for this dynamic community for decades to come. 2015 saw the completion of the provision of increased day-to-day working space for the Centre with the opening of the Investcorp Building to house the increasing library and archive material, as well as provide study areas, a much-needed lecture theatre and gallery space. The Kirdar Building at 68 Woodstock Road continues to provide offices and meeting rooms and is named in honour of Mr Nemir Kirdar, in recognition of his outstanding contributions to the Centre. 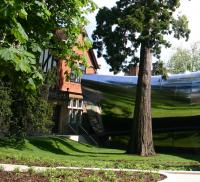 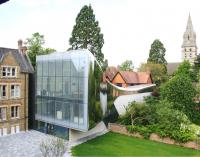