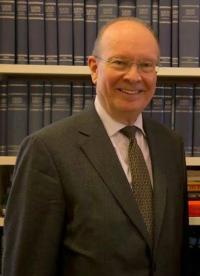 As a former senior British International Monetary Fund (IMF) official, and a highly regarded specialist in country debt crises, Watson was deliberately appointed to the Commission to bring an additional international perspective to the Central Bank at its time of intense crisis. He became an influential advisor to Patrick Honohan, the Governor of the Central Bank, during the crucial period of the country’s bailout, giving the Governor advice based on decades of experience as one of the IMF's top international economic crisis fire-fighters. To Watson’s lasting regret, the European Central Bank and the European Commission prevented the Irish Government, and the Irish Central Bank, from imposing losses on bond investors, a form of debt-relief which would have greatly eased the enormous burden, which has fallen on Irish tax payers, of rescuing the country’s banking system. In the difficult weeks and months that followed, Watson helped Honohan to develop the Central Bank’s policy strategy and, in particular, to identify ways of strengthening its risk management processes. Those who worked with him say that his low-key delivery could not hide his razor-sharp intellect, and his expert knowledge of international economic affairs.

In the arcane world of high-level international economic policy-making, Max Watson was one of the most respected practitioners, valued for his independence of thought, his intellect and his integrity. But he was much more than a dry economic analyst. He was distinctly multilingual, and an avid traveller, having studied languages at Cambridge, but also picking up languages (e.g., Japanese) as his career took him from country to country. Even in hospital towards the end of his life, he greeted successive nurses and doctors in their own native language, from English to Romanian, talking to them about the culture and politics of their countries. There was also a touch of the iconoclast about him. He was always loyal to the institution he served. Nevertheless, he was at no time slave to a prevailing economic orthodoxy or to a bureaucratic group-think.

This free spirit, contained in Watson’s professional life, was always ready to leap out when he escaped his office. He was an avid sailor, and spent many long weekends birdwatching with his wife Janny. And then, in 2010, he set off for India. His aim was to take part in a vintage Rolls Royce car rally through Rajasthan, unperturbed by the fact that he is not a car-mechanic (although his co-driver and brother-in-law was highly skilled mechanically). "I am still on the Rolls Royce rally in India with 400 miles down and 300 to go," he emailed back. "All 8 cars are still rolling (!) which is not bad as one is 97 years old. I confess that on the mountain passes I miss the power-steering and synchromesh, this car is 20ft long and weighs 3 tons, but it does develop the muscles."

Watson started his professional life at the Bank of England and was one of a series of young Bank officials to be seconded to the IMF (1979-81) as personal assistant to the Managing Director, whose office was then, as now, one of the most influential in global economic policymaking.  It took him no time at all to impress his new colleagues.

As Jacques de Larosière, Managing Director of the International Monetary Fund from 1978-87 and later Governor of the French Central Bank, puts it, "He was my personal assistant early in my first term (at the IMF), and I will never forget his extraordinary professional abilities: the quintessence of the best British international civil servant. His intelligence, his sharp mind, his diplomatic talent, did marvels."

This was a period in which the IMF was a key participant in the intense international economic diplomacy surrounding the US Federal Reserve's battle, led by Chairman Paul Volcker, to bring down double-digit inflation and to stabilise the dollar, in the wake of the second oil shock. De Larosière’s office led the IMF’s response. And so Max Watson, so early in his career, found himself already close to the centre of the financial universe, helping to liaise between the Managing Director of the IMF, the IMF’s Executive Board, the US Treasury, and the US Federal Reserve.

Watson returned to the Bank of England to its International Division in 1982, but decided to go back to the IMF as Chief of its International Capital Markets Division in 1984. By then de Larosière and Volcker were leading the battle to contain Latin America's debt crisis, itself a fall-out from US anti-inflation policy. That crisis brought several giant US banks, including Citibank, to the verge of bankruptcy, and threatened not just Wall Street but the whole of the global financial system.

During the fall-out from this crisis Max’s role at the IMF was at its most important. He developed contacts throughout international capital markets, and his division produced the first of what have become the IMF’s Global Financial Stability Reports. Over the next few years, along with Michael Dooley and others, Watson devised a debt-reduction plan for more than a dozen over-indebted Latin American countries, working against fierce opposition both from the US and from within the IMF. This helped lead to the Brady Plan, through which the Latin American crisis was eventually resolved.

As the 1980s progressed, macro-economic theorists, and too many policymakers, became obsessed with economic models aimed at curbing inflation in the prices of produced goods.  Until the global financial crisis hit in 2007/8, most theorists and practitioners largely ignored the key role which rapidly expanding financial markets were increasingly playing in shaping the world economy, and in creating asset price inflation and asset price bubbles. With considerable foresight, Watson began, during the 1980s, the protracted, and still continuing, process of strengthening the IMF's focus on financial sector issues to complement its macro-economic analysis. He was appointed Senior Advisor in the IMF’s European Department in 1999, and was a Deputy Director at the IMF from 2001 to 2002.

After leaving the IMF in 2003, Watson moved to the European Commission in Brussels. There he was asked to take on the role of Economic Adviser to the Director General of the Directorate General for Economic and Financial Affairs (DG-ECFIN), Dr Klaus Regling, in part because of his international reputation as a political economist, and also because of his deep understanding of the linkages between the financial sector and the "real" economy.

In this capacity, Watson was instrumental in warning the Nordic and Baltic member states of the European Union, well before the global financial crisis began in 2007/8, about the emerging threats to financial stability from excessive real estate lending by foreign banks. He became the coordinating editor of the 2006 Review of the EU Economy, which analysed the extreme imbalances that were then emerging within the Eurozone. The review clearly showed how these imbalances were destabilising competitive positions within the common currency area. This problem is something which would, in due course, give rise to the Eurozone crisis, and threaten the very survival of the single currency. The Review agreed with the widely-held view that there would need to be significant medium-term structural adjustments within the Eurozone. But it went on to call controversially for a significant change in the Eurozone’s Stability and Growth Pact, so that fiscal policy could be used more actively for counter-cyclical purposes.

Watson’s tireless appetite for life meant that retirement was never on his radar. When, in 2007, he decided to give up his post at the European Commission, he headed straight for Oxford University. There he deployed his formidable energy and charm, raising funds for and creating from scratch a new economic research centre at St  Antony's College, the Political Economy of Financial Markets programme (known as PEFM).

As was typical for Watson’s initiatives, this programme has broken new ground. As its first Director, Watson ensured that its publications were of the highest academic standard. He also invited not only eminent academics but also intellectual analysts from the world of hedge-funds as well as economists from both the public and private sectors, to participate in its work. Its programme of actions will continue and grow, partly as memorial to Max’s life’s work.

As if Oxford was not enough, in early 2010 Watson was asked by the Minister of Finance of Ireland, Brian Lenihan, to prepare a detailed independent report into the origins of Ireland's 2009 banking crisis. In doing this he worked alongside Klaus Regling, who had by then also left the European Commission. Together they produced an authoritative first statement on the factors which had caused the crisis. It was the publication of this report which led to Watson’s appointment to the Commission of the Irish Central Bank, and to his role in the Irish crisis which is described at the beginning of this tribute.