Every year SEESOX invites "our" Heads of Mission from South East European coutries, posted in London to a working lunch in Oxford. This tends to focus on recent work done by SEESOX, in particular, our annual seminar series; and also looks at the main issues in the region. 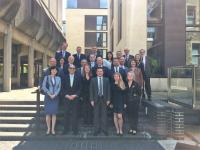 A number of topical issues affecting the region were discussed. In view of the Bulgarian, Romanian and forthcoming Croatian Presidencies of the EU, there was consideration of what the obligations of the rotating Presidency meant for the newer member states of the Union, and how Embassies prepared themselves for these. This led into a discussion of the experiences of longer-term member-states including Austria and Greece. The successful solution of the Macedonia name dispute was noted and applauded, with an assessment of how the agreement had been reached, and implications for the two countries directly concerned, the region and the EU. This led to a wider discussion of the direction and future of the Union, with a strong focus on the merits of making progress on enlargement. This should not await the prior deepening of the monetary union. SEESOX raised the scope for possible agreements between SEESOX and the Central Banks of South East Europe, in order to further work on political economies: and invited Ambassadors to make enquiries and report responses. SEESOX also reported that next year’s seminar series would be on the geo-politics and geo-economics of the region, and asked Ambassadors to put forward suggestions for themes and possible speakers. The lunch started with a briefing by SEESOX on this year’s comparative seminar series on the diasporas of South East Europe, and their effect on host and home lands. A number of Ambassadors contributed their views on the extent and complexity of their diasporas, stressing the range of and diversity of the people who comprised them, and the resulting differences of make-up and experiences. It was evident that there was much scope for future productive collaboration between SEESOX and the Embassies on this issue of mutual interest.

SEESOX briefed on their Hilary Term seminar series on key issues and developments in the region, concentrating in particular on security, geo-political challenges, the Berlin Process and the focus on the Western Balkans in the thinking of both EU Member States and the Commission. There was general round table discussion of these issues, and of the three forthcoming Summit meetings (EU in Sofia in May, Berlin Process in London, and NATO in Brussels – both in July). SEESOX also briefed on their flagship Diaspora Project, leading to a full exchange about the size, role and make-up of the diasporas of South East European countries; and some examination of the scope for comparative studies. 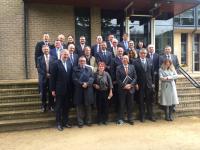 The main issues discussed were how the rise in illiberalism elsewhere in Europe and the world was reflected in the region; the consequences for the region of Brexit and other political developments in the EU; and economic trends and the welcome appearance of some green shoots after a period of stagnation. Ambassadors were briefed on the latest flagship SEESOX programme, the Diaspora Project. There was full agreement on the importance and value of the Ambassadors’ Forum, and the need to continue this excellent tradition of open and wide-ranging dialogue.

This year the question was how the region of South East Europe was coping with pressures from outside, and also from tensions within, Europe. The main subjects on the table were the refugee/migration crisis, the geo-political picture, the economy and the rise of political illiberalism. There was overall acceptance that the crisis of migration/reception needed practical solutions, that the region had its own role to play in helping to resolve the various crises, and that the EU in general retained its force of attraction for applicant states.

There was valuable discussion of three main issues: the Workshop on Bosnia and Herzegovina held on 30 January; the Hilary Term seminar series on Global South East Europe, looking at the region from a world rather than just a European perspective; and the diaspora project, which will be a centre piece of SEESOX work in the coming years. There was also discussion in the margins of possible country specific programmes, to be funded by the countries concerned. 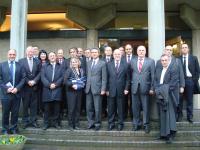 This year we welcomed eleven ambassadors, including Emil Brix from Austria, given the country’s special role in the region. As usual there was focussed discussion on recent, current and future events. A particular theme of common interest was migration, in the light of the public debate in the UK on this issue. HE Konstantinos Bikas, Ambassador of Greece, spoke on the priorities for the Greek Presidency of the EU. 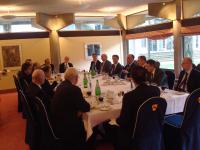 In January SEESOX hosted a working lunch for the Ambassadors of the South East European countries. It was an excellent opportunity to exchange views on current affairs in the region and the ways in which SEESOX could address the various issues. SEESOX intends this to be a regular annual event.